Your Guide to Choosing a Healthy and Ethical Turkey 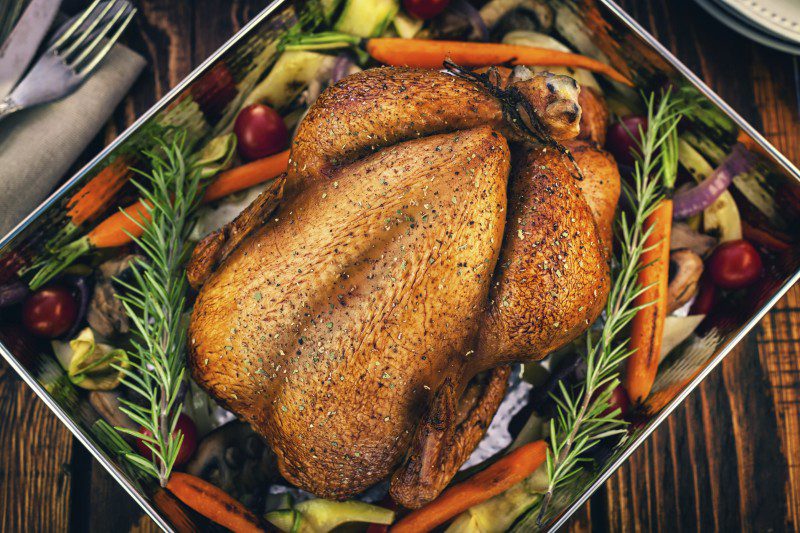 Families are becoming more and more conscientious of the kind of food they are serving at their tables. During the holidays with food ‘ a plenty, it’s important to be aware of where your food came from and make sure you are making not only a healthy choice but an ethical choice, especially when it comes to buying the bird.

There is a lot of options when it comes to finding a turkey and it can be tough to keep it all straight. That’s why I wanted to share some information that will hopefully help guide you in your decision and bring greater awareness toward what constitutes an “ethical” turkey.

Did you know that the U.S. is the world’s largest producer of turkey and that each year the average American consumes about 16.5 pounds of turkey? According to the National Turkey Federation, about 20% of all turkey is consumed on Thanksgiving Day! That is A LOT of turkey!

Most people buy the typical Butterball turkey or “broad-breasted” turkeys. These kind of turkeys are raised to produce more meat but they end up not being as flavorful. They are not raised very humanely and are pumped with antibiotics that cause them to grow faster and live shorter, unhealthy lives confined in small areas with countless other turkeys.

Most conventional turkeys also eat pesticide-laden corn and soy that have likely been genetically modified, so it is best to stay away from “main stream turkeys.”

When you go to purchase a turkey there are a few things to be aware of and and look for:

Any birds labeled “Certified Organic” by the USDA have been fed organic grains and have not been treated with antibiotics or given growth hormones and have freedom of movement.

Buying an Organic turkey is not quite enough though. Also look for a turkey that is “pasture-raised.” Just because they are certified organic does not mean that they’ve been able to freely roam in pastures, it only requires that they have an exit and many turkeys end up still living in a crowded barn. When a turkey is pasture-raised they have open access to the outdoors, they graze on grass and their meat tends to be higher in Omega 3 fatty acids (the good fat!).

There are a variety of heritage turkeys like American Bronze or Narragansett which means their lineage is traced back to the domesticated turkeys that the Native Americans raised. They breed naturally, eat vegetarian (like organic and pasture-raised turkeys do as well) and have free range. Because of this, they tend to be leaner. Heritage turkeys can typically be purchased directly from farmers and aren’t as easy to find.

Pro-Chef Tip: You don’t want to cook this turkey as long because it gets dried out quicker.

A kosher turkey is one that is slaughtered in a kosher slaughterhouse. The process has to be approved by a Rabbi and abide by Jewish law. The turkeys are put in a pre-brine. Many people, regardless of religion, like buying kosher turkeys so they don’t have to brine them on their own.

The words “natural” “cage free” and “Hormone free” don’t carry much substance because all poultry raised for meat is expected to be cage free and is not allowed to be injected with hormones. The word “natural” can also be misleading because it simply means they were not given any synthetic things have been added during processing. It does not indicate how they are raised or taken care of.

I recommend buying a fresh, certified organic, pasture-raised turkey. Fresh turkeys tend to be juicer and more flavorful that would otherwise be lost in the freezing process. If you’re wanting a fresh turkey you’ll most likely have to order it in advance. If you’re going to buy anything organic have it be your meat! You can get these kind of turkeys sometimes at your local grocery stores like Whole Foods. If you plan ahead you can even purchase it from a local farmer. You can visit www.localharvest.org or www.eatwild.com to find a local provider.

Do keep in mind that organic and heritage bred turkeys tend to carry a hefty price tag. While most butterball turkeys cost $0.99 per pound, I have seen organic turkeys cost up to $4.99 per pound. In my opinion, it is worth paying a little extra to know the turkey is healthy to eat and ethically raised.

This year we’re using Organic, Pasture-Raised turkeys for our holiday meals. Don’t want to tackle the turkey on your own? We can prepare just your main entrees, sides or the whole meal for you and your family this holiday! Click the image below to get started!